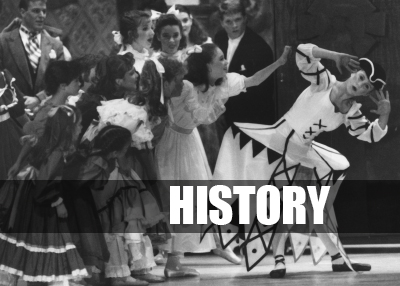 Ballet San Angelo, Inc. (BSA) formerly known as San Angelo Civic Ballet was chartered August 16, 1983 as a 501(c)(3) not-for-profit organization and co-founded by Ann Southall, Debbie Carter, Teresa Branon, Mary Lynn Kusior and Gene Smith. The organization was originally created with the purpose of producing The Nutcracker in San Angelo, Texas. Over the 35 years since, BSA Board of Directors has expanded upon this foundation to offer exceptional dance education, creative movement-based community programs, and high caliber performances to West Texas.

A high standard of ballet training, experienced artistic staff, and original choreographic work continued in the following years. One celebrated moment in the organization’s history was Susan Olson’s 1999 Nutcracker, where Paloma Herrera, Tamas Solymasi, and Guiseppe Piccone for American Ballet Theatre danced guest roles, the same year that Herrera was named the most influential ballerina in the United States. In 2005, Artistic Director Meghann Bridgeman began a successful ten-year tenure, implementing a classically based curriculum, expanding and improving classes from creative movement to pre-professional levels of ballet and pointe. Enrollment quadrupled and advanced level dancers were regularly accepted into nationally recognized programs. BSA also expanded the performance repertoire beyond the annual production of The Nutcracker during this time to bring five contemporary, youth and classical ballet performances to San Angelo each season. To support this rapid growth, BSA filled new administrative, executive and faculty positions that played vital roles in the administrative development and donor relations of the organization.

In 2010, a Scholarship Fund was established to assist upper level students with the costs of summer intensives, and in 2011, BSA implemented its first TEKS aligned dance pilot program in three Title 1 schools. In partnership with our school district, a new program for pre-professionals was established in 2013, providing these elite students with world-class dance training while allowing them to stay in their home town and public school. Throughout the years, the Tuition Assistance program has served as a critical ongoing bridge to the community, reducing financial barriers and making BSA the most accessible and community-oriented dance education destination in West Texas.

In the summer of 2016, the Board of Directors took a critical step and broadened the mission of Ballet San Angelo to Empowerment through Movement. Also that summer, the keystone civic arts organizations, with BSA as a founding partner, completed a ten-year project called the San Angelo Performing Arts Coalition (SAPAC). The completion of this state-of-the-art home enabled a fuller expression of BSA’s mission, and when former BSA student and now Artistic Director, Erin Lane moved back to San Angelo and expressed a unique vision for community engagement programming in our new studios, the fitness, contemporary, and Dance for Parkinsons/Joy of Movement offerings were welcomed by the community. In the fall of 2017, Sharing Dance Day, birthed out of a mentor relationship with its originator Canada’s National Ballet School in Toronto, began as an annual city-wide public health initiative and celebration of dance. In December of 2017, BSA had a triumphant return of The Nutcracker to a newly refurbished Murphey Performance Hall at City Auditorium. Thanks to Elta Joyce Murphey McAfee and an army of community arts supporters, this historical architectural jewel is ready to house this seminal ballet work for years to come. As BSA furthers its creative work in the years ahead, they strive to continually validate their local arts non-profit status, serving the community through dance, as a generator of fresh new work, and as a cultural heritage preservation organization, guarding a beautiful, physically demanding and unforgivingly precise art form that is over five hundred years old.